What we’d love to see…

animal facts cards for each of the animals especially ones you haven’t seen before, perhaps a mini game where you draw the spots on a leopard or stripes on a tiger and the ability to feed the animals

Who doesn’t love spending time with their grandparents?  This fun zoo themed app is sure to delight and had my son learning animal names, spelling and math and he learned about a new animal each time that he played.

At the Zoo With Grandma and Grandpa App by Fairlady Media is not your traditional go to the zoo and see the animals type of app.  In fact it’s much more fun and educational!  The app features 8 mini games which you plan along as you meet new animals – some that my older son had never even seen at the zoo.  You also practice matching, addition, puzzles and more!  This is the 10th app by Fairlady Media and the first that features both Grandma and Grandpa as central characters within the app.  The app features over 50 animals from around the world and is designed for elementary aged children.

Educational games within the app include:

1) Animal Sounds: What animal sound do you hear behind the curtain?  Pick one from an assortment of 3.

2) Fix the sign: Use the letters to fix the sign – it must be in the correct spelling order, you move the letters at the bottom to match the letters on the sign and has a zoo themed twist using types of animals.

3) Spot the Difference: Which fish in the aquarium is different?  Tap to choose the right one and see what might be different about it as well as the name.

4) Tram Math: How many people are on the tram.  You can either finger tap count or see that each car has a certain number in it to solve the problem.

5) Jigsaw Puzzle: Put together the pieces of an animal and learn about them.  Does the animal live on the ground or in a tree?  What is it called? 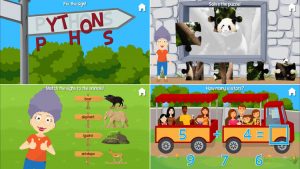 6) Fossil Dig: Who doesn’t love getting dirty?!?  Use your finger to help find the fossil and don’t get dirty in real life!

7) Match the sign to the animal: Using your eagle eyes, determine which sign goes with each animal type.  I loved that the animals in this game were both ones we knew like alligator and other times a Tasmanian devil!

8) Feed the Penguins: Move the penguins to find the fish and feed them.

3) Move the seal to balance the ball on his nose.  How long can you keep it in the air?

4) What trip to the zoo is complete without picking out a souvenir to store and play with in your toy box? 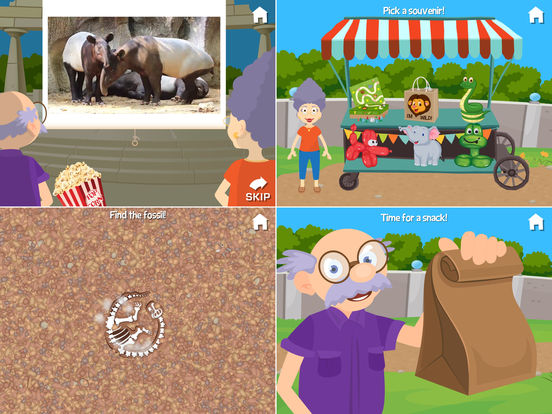 I loved that this app introduced my son to new animals especially ones that were not traditional at the various zoos that we have visited around the country.  Having a variety of animals and games made the app fun and interactive.  We also really liked that both Grandma and Grandpa participated in the app – this was fun because we usually only see one or the other.  The graphics are fantastic and clear and my son learned something about a new animal each time that he played meaning that he kept playing to keep learning – a huge win!

One enhancement I would like to see is “animal facts” – perhaps you could add in cards at the end of the app that you earned with facts about some of the more unusual animals like the Tasmanian devil which would include a photo, animal sound and a fact or two about them.  My son also loved being creative and “drawing the stripes” aka decorating the animals with crayons and asked if there could be a game where you draw the spots on the animal or stripes on a tiger within specific lines.  My son also asked if we could feed the animals to learn more about them as well – we recently learned that a turtle at the aquarium liked brussel sprouts which encouraged my son to at least touch them!

There is no external advertising or in-app purchases beyond Fairlady advertising their own apps.  Internet access is not required to play the app.  External links are protected with a parental gate which requires your year of birth.  You can access the settings and turn on and off the games depending on your child’s ability level which allows you to target specific skills or make it easier for younger kids.  You can also turn on and off the music.

Overall, this is a fun zoo themed app that introduced my son to some exotic animals we had never seen before. My son enjoyed playing the app over and over again and learned something new each time if it was an animal or perhaps how to spell an animal name.  Huge amount of replay value and the app can target younger or older kids depending on the options you choose for the mini games. We paired Riley the Zebra for purposes of this review. Having my toddler play with the app made him laugh since he was a zoo animal!