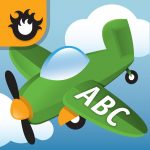 AlphaTots by Spinlight is one of my go-to apps for letter recognition and beginning awareness of phonemes. This app not only teaches but has the child be an active participant in learning. The layout of the app makes it simple to navigate, but in addition, teaches some basic early classroom skills that aren’t readily apparent in other apps. Within the app are important lessons and practice with skills such as waiting, formulating a plan, and then acting built into the gameplay. These are lifelong learning skills that help to ensure a child’s success in both school and life. 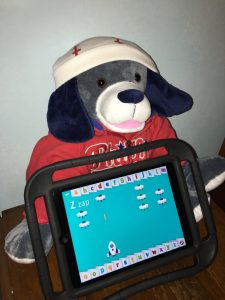 purposes. Learning both the lower case letters with the phoneme will then help kids bridge that gap by sounding out letters and discovering the makings of words.

The impetus to play with the alphabet is enticing. Gameplay not only centers on the letters but also include activities such as building a robot. recycling items to their proper bins, and zapping the spaceships as in an old arcade game. This helps to cement information in the minds of early learners because they are FUN. And if it is FUN, repeat play is guaranteed. Kids can explore letters in a sequential order or tap and hold a letter for approximately 3 seconds for return play. I LOVE this feature as it makes choices deliberate as well as teaches waiting and impulse control in getting something you want.

Playing with Bluebee reinforces play as children now have a guide and a witness to their discoveries and newly found competencies. Bluebee serves as both a teacher and friend. The Bluebee Pal does not always need to be paired with the sound on, as the prompts coming from the Bluebee can be faded for more independent carryover of information. The importance of Bluebee is initially one of being a teacher and then as a friend and witness in your child’s success. The joy of knowing is best shared with friends who find it grand that you’ve learned something new. Alphatots is available on iOS, GooglePlay, and Amazon Apps for Kindle.