The Bluebee Pal Pilot collaboration between New York City Schools boroughs are demonstrating to be a great success! Testimonials from early childhood teachers and speech therapists acknowledge the integration of Bluebee Pal as a valuable educational tool to motivate students in learning. Bluebee Pals assistive technology tools are incorporated into classrooms to support teachers in engaging literacy and communication through lesson plans, social/emotional and life skills. The Bluebee Pal Program highlights a robotic stuffed animal that connects to IOS and Android devices and speaks through all apps with a narrative, in addition to its the Bluebee Pal App. In 2020, Kayle Concepts brand owner introduced Bluebee Pal Lesson Plans, Book and Activity guide for early childhood educators.https://www.bluebeepals.com 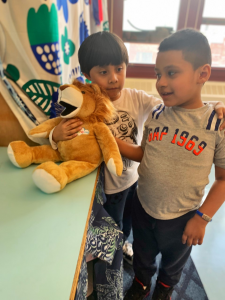 Bluebee Pal is a fun way to encourage my students to participate during ElA. As a class although on the box the name is Parker, the students voted on naming the monkey momo. During read aloud they are engaged with momo and are fascinated that a stuffed animal is reading directly to them. When it comes to questioning they will answer the question that is asked and will give momo a high five for participating. Overall they have really enjoyed Fundations with this device it has promoted their encouragement to not only engage but to sit and attain what is being said by the device. In addition to this during centers, there is an independent center where students have an opportunity to work with momo with their letters which they love to do. They have incorporated momo into their routines once they unpack they ask where momo is.

Rachel Callahan, K-2 Teacher, Bronx
My students love using the Bluebee Pal. They were intrigued by the lion and would repeat letter sounds that Bluebee Pal said as we were able to record. They also like stories and games. Students who do not demonstrate strong, functional, speech are more likely to participate from using the Bluebee Pal. 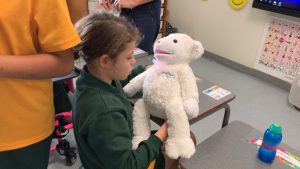 ​Vaishalie Ramsumair, M.A. CF-SLP, TSSLD, Brooklyn
I have now begun to integrate Bluebee Pal “Lily the Lamb” and the Bluebee Pal app into my therapy sessions. Upon being introduced to the Bluebee Pal, my nonverbal and minimally verbal students’ eyes immediately light up. My students have been highly motivated by the “daily activity” feature, where they are given the autonomy to select an activity based on the rooms in the Bluebee Pal house.
The Bluebee Pal has helped one of my students in particular to generalize her ability to request via static display speech-generating device (GoTalk9+). While lunchtime has historically been the sole motivating activity for this student, she demonstrated the ability today to request Lily the Lamb within a structured play context using her GoTalk 9+. I will definitely continue to use Bluebee Pal Lily and Bluebee Pal app in future therapy sessions.https://apps.apple.com/us/app/bluebee-pals/id1331972815