Bluebee and the Fayetteville-Manlius School District

Bluebee Pals were donated to the Fayetteville-Manlius Central School District as an assistive technology tool to engage communication and learning in special needs classrooms and participate in research with Boston Children’s Hospital. Our tech buddies provide companionship and encourage communication when connected to Bluetooth enabled mobile/ tablet devices and paired with apps with a narrative.

The Fayetteville-Manlius Central School District is a K-12 public school district located in the Town of Manlius in Central New York, enrolling approximately 4,800 students. F-M serves a large portion of the Town of Manlius, including the villages of Manlius and Fayetteville, as well as portions of Jamesville and Pompey. The district is partially funded by and governed under the authority of the New York State Education Department, whose standardized examinations are designed and administered by the Board of Regents of the University of the State of New York. The district has been recognized statewide and nationally for academic and athletic excellence.

“Imagine a room filled with technology that has the potential to shape how children on the autism spectrum learn. Then picture a team of teachers, therapists and IT specialists driven by the singular purpose of accelerating communication and learning for these children. Well, stop imagining because that is the essence of the Mott Road program,” said Dr. Howard Shane, a Harvard Medical School associate professor and director of the Center of Communication Enhancement at Boston’s Children’s Hospital.

Dr. Shane served as a consultant for F-M during the 2015-16 school year and provide training in 2016-17 to all of the district’s special education staff on his Visual Immersion SystemVisual Immersion System (VIS) is a unique communication method that uses visual supports – such as videos, photographs and pictures, along with technology such as iPads and Apple watches – to enhance and expand the language and communication skills of students.

During the 2017-18 school year, the district formally partnered with Dr. Shane, along with Dr. Ralf Schlosser, a professor from Northeastern University, and other researchers, to bring VIS to a Mott Road Elementary School class of seven students diagnosed with autism. Fayetteville-Manlius School District is the first and only school district that they have worked with. “The progress and growth of our students participating in this project have exceeded all of our expectations,” said Lisa Miori-Dinneen, F-M’s assistant superintendent for special services. “The VIS methodology has been life­changing for our students and their families.”

Dr. Shane described some of his recommendations for using the Bluebee Pal Parker and friends for directive teaching, symbolic play instruction and other ideas into the curriculum, he is developing in a research-based classroom in the F-M School district. The school is excited about introducing Bluebee Pal Tools into the hi-tech classroom.


My favorite photo is Suzy using the Ipad and Bluebee. She is so engaged with Bluebee and this was the very first day she was exposed t it( amazing)! As I mentioned to you, I am writing an article about your generosity for our newsletter in October as well as how we have been involved with the research study and will include photos of the children using the Bluebee Pals. I will periodically send you updates with videos and photos from the class as well as other classes that are using the Bluebee Pals. 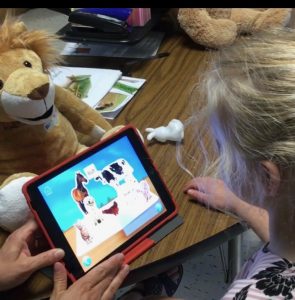 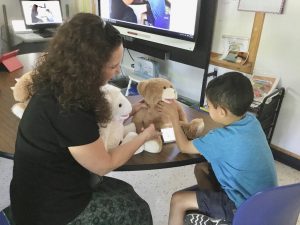 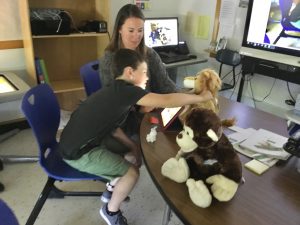